On October 19th 2015, one of our science committee members, Eelke Jongejans,  attended a symposium in Amsterdam on “Connecting data for research”. Here are Eelke’s impressions about the meeting:

Scientists and a board member of the Dutch Science Foundation all stressed the importance of shared data for progress in scientific research. Engaging examples like the data-driven management of the 2014 Ebola crisis, and coastal oceanography based on the combination of opened-up data sources (to find out whether our dunes and dikes will continue to keep us dry), clearly show the advantages of open data. But also ecological research benefits from open data, allowing analyses at a wider geographic and taxonomic scale, as shown in the presentation by Cees Hof on the Global Biodiversity Information Facility (GBIF) and in Rob Salguero-Gómez’ slides on COMPADRE and COMADRE that I used in my presentation.

But how to enable and encourage researchers to make their data freely available? Information law Professor Mireille van Eechoud explained that ‘open data’ have several legal challenges, for instance concerning intellectual properties and data protection. Law-making is unlikely to be the driver of an open-data revolution. Other speakers also emphasized the carrots and sticks that could encourage researchers. Funding agencies and journals requiring open access to research data can be seen as sticks that push researcher over the hill top that needs to be climbed to actually archive data in the open. Representatives of DANS-easy and 3TU, Dutch data repositories, were also present at the symposium, claiming that that perceived hill isn’t so steep and high at all.

Even more interesting are the carrots. How rewarding is it when your archived data are reusable and citable (DOI)? How can institutes profit (e.g. international visibility and esteem?) when they host (expertise on) large amounts of open data? Do search committees acknowledge the value of the data publications? In that light, it is interesting to think about what COMPADRE and COMADRE can do to further encourage researchers to want to archive their population matrices and accompanying metadata in the Plant and Animal Matrix Databases. Plans to provide DOI’s to (new) data entries are currently being explored by the core committee of these databases, and would have several advantages. Researchers could then mention the DOI, that they received after archiving their matrices, in their manuscripts, showing that data openness and permanency is ensured. Separate DOI’s would make their data more visible and citable within big databases like COMPADRE and COMADRE, although it is not standardized yet how that should be done in comparative demography studies. Another important advantage could be that these developments could encourage researchers to enter their new matrices and metadata themselves (also currently being discussed as a future step in these databases), taking an important burden from the digitization team that then ‘only’ needs to check whether new entries are in order.

At the same time it is important to maintain the policy of embargoes. Giving researchers enough time to milk their own data likely takes away a big part of the hesitation to make one’s data freely available.

Coinciding with the 3rd annual Evolutionary Demography Society conference, in Lunteren (the Netherlands), we announce the release of COMADRE v.1.0.0, an open-access database for animal demography. COMADRE comes online nearly a year after the release of its sister database, the COMPADRE Plant Matrix Database. 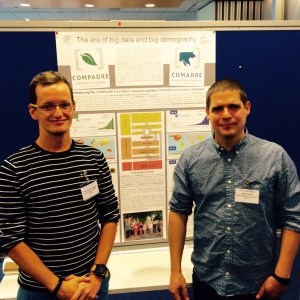 COMADRE contains 345 animal species from 402 studies and 1,625 matrix population models of global distribution, ranging organisms as different as sponges, birds or mammals, including humans. The preprint of the manuscript introducing COMADRE is available in bioRxiv, and the manuscript is currently in review at Journal of Animal Ecology.

Together with the release of COMADRE, we also release the new version of COMPADRE: v. 3.2.1. This version contains 637 plant species from 735 studies containing a total of 6,242 matrix population models.

These are the updated user guides for COMPADRE and COMADRE. In an effort to remain as transparent as possible in the data digitalisation and error-checks effected in the database, we also make available the internal data entry protocols.

The release COMADRE coincides too with a new look to the portal for both databases. The main aspect of this portal is that user registration is no longer required, making these databases fully open data and open access.

Upcoming workshops on the usage of these resources are planned for EvoDemoS (Oct 2015), BES (Dec 2015) and a weeklong course at the Max Planck Institute for Demographic Research (April 2016, exact week TBA).

We hope that the research community will use these databases for exciting ecological and evolutionary questions!

PS: this is how our students (the COMPADRinos) feel about the release of COMADRE: