What makes some plant species more vulnerable to extinction than others? With the current extinction crisis in mind, this question is becoming increasingly important. Because for more than 90% of known plant species the current conservation status is still unassessed (IUCN, 2017) and with a lot of species yet to be discovered (Pimm & Raven, 2017), understanding the factors that are associated a high extinction vulnerability may help to prioritize populations for conservation. Examples of such factors are low reproductive rates and a high susceptibility to environmental disturbance. While there has been considerable effort in parameterizing and compiling demographic data, as demonstrated by the COMPADRE/COMADRE initiative, such data are available only for a relatively small amount of species.

This leads us to the start of our research (de Jonge et al., 2018), which was recently published in Biological Conservation. Inspired by the theory of allometric scaling (West, Brown, & Enquist, 1999), and by the recent work by one of our colleagues on mammals and birds (Hilbers et al., 2016), we decided to attempt to use functional traits to estimate demographic rates, and subsequently extinction risks, in plants. To do so, we derived the maximum growth rate for many species from the COMPADRE Plant Matrix Database (Salguero-Gómez et al., 2015), and  then we combined these with maximum plant height reported in the TRY database (Kattge et al., 2011). To estimate the susceptibility to environmental disturbances, we also calculated the variance in population growth rate for time-series reported in COMPADRE. As expected, plant height is negatively related to both maximum population growth rates and the susceptibility to environmental disturbances. 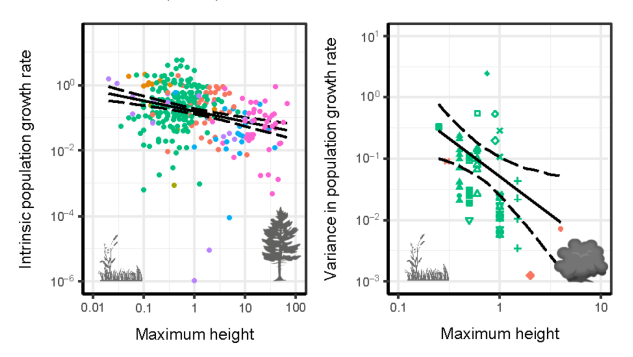 So now we know that large plant species indeed grow slower but also more stable than their smaller counterparts. But what does this mean for extinction vulnerabilities? Generally, being less susceptible to disturbances is better. However, being able to increase population sizes quickly can help populations recover after environmental disturbances. To see how these relationships with plant height add up, we calculated the Mean Time to Extinction (MTE) and Probability of Extinction (PE) as a function of height. And there you have it… bigger does seem to be better… all else being equal. Of course there are plenty of other variables that are probably more important than height, but these might not be measured as easily as height. 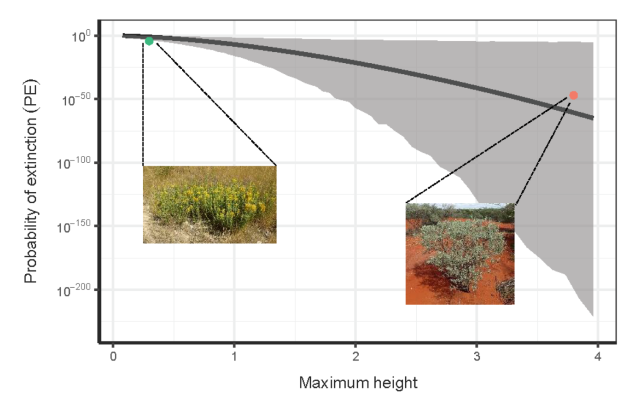 Figure 2. The probability of extinction (PE) as a function of plant height calculated using the derived relationships between demographic rates and plant height (de Jonge et al., 2018). Solid black line gives the median PE and shading shows the 90% confidence interval. Two plant species for which the PE could be calculated directly are shown, left: Solidago mollis and right: Eremophilia maitlandi

Our work demonstrates how linking large databases such as COMPADRE/COMADRE and functional trait databases (see also Adler et al. 2014) can reveal relationships between traits and demography. While COMPADRE already offers a huge collection of plant demographic, long-term monitoring studies on populations of large plants are still in short supply. Furthermore, during our research, we often found that the overlap in species between the different databases was too small to successfully combine them. For example, we were not able to investigate the role of other traits, such as seed mass or wood density, because there were not enough species occurring in COMPADRE for which such data were available in TRY. Increasing the species overlap might be done by integrating the demography and functional traits of species in one database. Such, multi-faceted global databases would help us to better understand the relationships between functional traits and demography.